In a small space between classrooms, punnets of tomato seedlings are lined up and half a dozen school students are pushing fingers into the dirt and chatting about music. 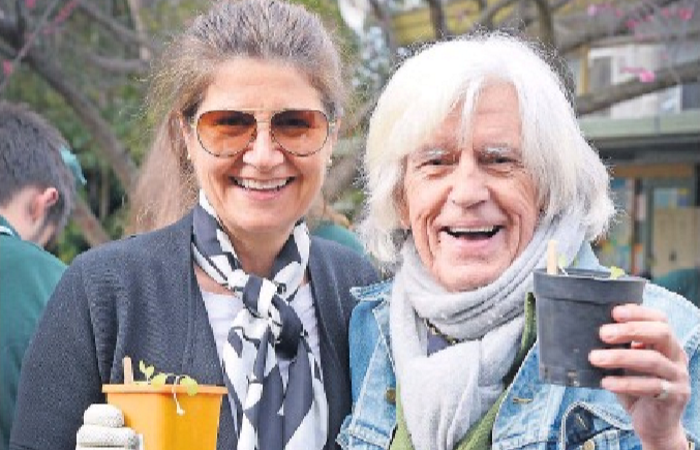 They are being watched by some old blokes in floppy hats. One of them steps in and offers gentle advice. ‘Just tap the side and slide it out care fully,’ he says, as the seedling roots dangle like cotton threads from the potting mix. The seedlings are tenderly transplanted into larger pots and the human conveyor belt continues. Wanganui Park Secondary College students and older people — a mix of retirees, retirement village residents and Rotary Club members — have been connecting in this gentle way for the past six or seven weeks as part of the I Wish I’d Asked project.

The program was one of several selected for funding under the Victorian Government’s Pick My Project scheme last year. It now includes interviews and videos of Shepparton young people chatting to Vietnam veterans and older migrants, and there are plans to help older people engage with the digital world — such as virtual reality — guided by young people. I Wish I’d Asked project founders Danny Finley and Eva Gruen said it was about making connections. ‘Just for the students to engage with older people — it’s been fantastic. They just seem to love interacting with seniors and absorbing their knowledge,’ Mr Finley said. ‘We don’t call them students and seniors, we call them silver warriors and apprentices,’ he said. Ms Gruen said there were plans to expand the Shepparton-based project across the country.

‘We want to focus on Shepparton first to get it right, but the government wants us to take it further. Rotary wants to roll it out across Australia,’’ she said. Back on the seedling production line, Banksia Lodge retirement village resident and dairy farmer of 40 years Roy Rowan is offering up his tomato growing secrets. ‘It’s all about preparing the soil and getting the compost right; cow manure is the best,’ he says. He looks around at his apprentices. ‘They’re all dead keen,’ he says.